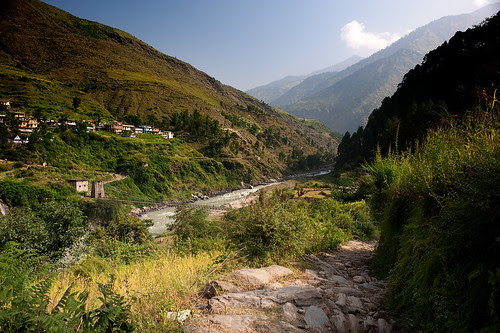 We left Rishikesh this morning at 6am without breakfast. It was a pleasant warm morning but still overcast as the minibus climbed out of the valley. It did rain a little as we climbed but it soon became clear again as we drove on.

After three hours we pull up for some tea and toast and then stretch our legs in the sunshine. Keith and I stroll down the road thinking the bus can pick us up but we hear some yelling and have to turn back. Apparently the driver had taken a detour to the cafe and was going back the way we'd come!

For a long while the road meandered alongside the Tehri Reservoir until we climbed up over the Tehri Dam itself. The scenery is green and the valleys are wonderfully terraced. We stop for another tea at a cafe overlooking the reservoir and marvel at the emptiness of it all. Not a single boat mars it's huge surface. I wondered if it was full of fish but then realised that the locals are vegetarian and wouldn't be interested!

Later we stop at Uttarkashi for lunch. The restaurant is dark and busy and the food is good. We stretch our legs outside as the crowds mill about.

Eventually, at 3pm, after 9 hours on the road we arrive at Latasera just before the tiny village of Malla. We meet our guides and porters and lug our gear a short distance over the footbridge to a field beside the Ganga River. On the path I see a brilliant green black and pink Swallowtail butterfly but failed to get a decent shot. 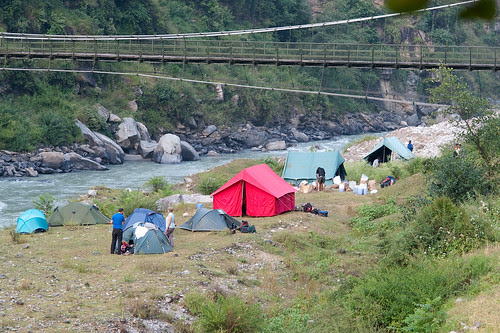 After setting up camp we stroll along the riverbank and then have a wash in the freezing river. Once the kitchen tent is set up we are brought a cup of tea and later of course we have the first of many dinners prepared by our Chef. The porters have there own kitchen stuff and prepare there own meals. We must have about 15 or 16 porters here and we will gradually get to know them over the next few weeks. We also have 3 muleteers and a team of six mules to carry our stuff. That makes a party of about 25!

I wake at 5.45am to a warm morning, though the sun has not yet reached into the valley. A drove of several hundred sheep and goats clatter across the footbridge and disappear up the trail. Keith gets up and we sit by the river bank watching the world go by. Two young lads come down and bathe in the river and then another host of goats and sheep come across the footbridge, followed by a small group of mules. 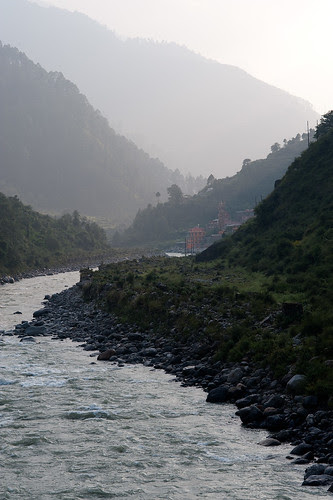 Maneesh, our young liaison guide, arrives with our morning tea shortly after 7am. This will become a daily ritual. We then pack down our tents and gear whilst breakfast is prepared. We have cornflakes with hot milk and boiled eggs with toast and tea.

We were ready to leave by 8.30 but it took a long while for the porters to sort themselves out and to get the mules loaded and we didn't actually get away until 9.20. It didn't really matter as we only had a short walk today - 1hr40mins - and therefore had plenty of time. I guess it took some time for the porters to agree on who was to carry what and to ensure that the loads were evenly distributed. The mules were carrying the bulky stuff like the food and the fuel as well as the big tents. 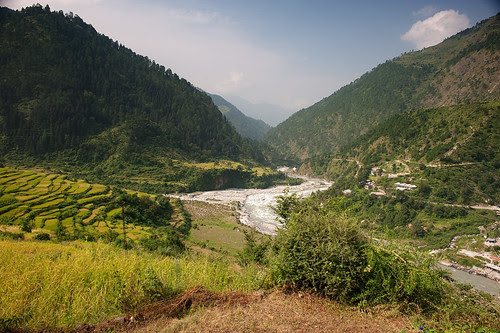 The trail climbed out of the valley and we went ahead of the porters until we reached a river crossing. The bridge was in two parts. First a huge tree trunk was slung across to a huge boulder in the middle of the river and then two logs, with stones balanced between, went from this rock to the far bank. It was a precarious balancing act to sidle along these to get to the other side particularly when wearing a pack.

We stopped here and waited for the guides to arrive as we were unsure if this was our stop for the night. It didn't look like it as there was only a small patch of clear beach on the river bank and surely not enough space for us all to camp. However it turned out that this was indeed the spot and the porters claimed the sandy beach spot and we had to go back across the logs and clear a space on the other side.

Keith and I go for a stroll upstream to see what we can see; a few butterflies. When we get back we sit by the river and have some snap whilst watching the huge tadpoles and small fish.

When the main body of porters arrive an hour later we find a small clearing in amongst the undergrowth and set up our tents. The only difficulty being that we are on the opposite side of the river from the Mess tent and had to cross and re-cross the river many times!

Later in the afternoon we come down to the river to bathe. It's icy cold, but we do get in and shower underneath the small waterfalls and swim in the tiny pools. We also washed out some clothes and lay them on the rocks to dry in the sun. Whilst lazing about Maneesh arrives with lemonade and biscuits for us and has managed to carry the tray whilst balancing over the log bridges!

In the afternoon Keith and I go for another walk upstream and this time go a bit further up the forest trail. We see some long-tailed magpies, a small yellow bird and a couple of partridge like things. We also see a large chicken sized bird with a crest. We have a small book about Indian birds with us but it's not complete.

On our way back we hear some crashing noises in the tree above us and are amazed to see three very large monkeys. They are a silver grey colour with a very long and thick tail which is black at the end. They have very black faces with a fringe of white fur. They turn out to be Common (or Hanuman( Langurs. One of them broke a branch and fell to the floor of the forest before scampering away.

Back at the river bank we collected wood and prepared a fire. I had another wash in the river to freshen up! When I came back to the beach after going to my tent I found that James had lit the fire and had used kerosene! This was against the rules established on our first trip to the Himalayas but he claimed a porter had come over the bridge with a small cup -full when he'd been noticed getting the fire going!
Posted by Steven House at 11:03