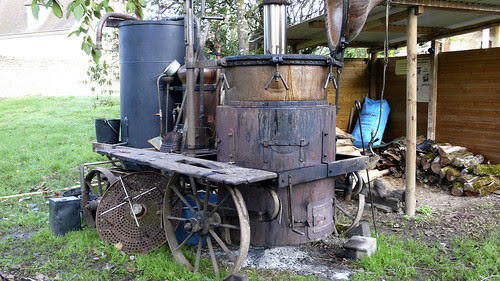 Today’s Saints day is for St. John the Baptist. This is the traditional day, in France and Italy, for making Walnut Liqueur (Nocino) and Walnut Wine (Vin Noix).

At this time, at least in southern Europe, the walnuts are ready to use. They are not ripe yet but they are well enough formed for these uses. When cut in half, which is not easy, they should have a jelly-like constituency and the development of the nut should be visible. In more northern parts you may have to wait a few more weeks.

When handling the nuts be aware that they will stain your fingers. Kitchen gloves might be useful.

The image above shows a mobile still used for making spirits, usually Eau de Vie. These stills are operated by old fellas, in the south of France, who still have the license to operate them. Apparently no new licences are to be given so when these men are gone then so will the sight of these stills around the countryside be gone. A sad state of affairs. The distiller traditionally travels from farm to household, to village and you bring your own excess fruit to be distilled. Any one is allowed to make 10 litres of spirit for personal use only. I believe you have to pay a certain amount in tax too.


When I came across this still, in October time in the Dordogne region of France, they were making Eau de Vie from plums. At first I thought it was an illegal still but they explained everything to me and showed me the posters explaining the rules. However they did bend the rules and sell me a wine bottle full of the stuff!

Place all these in a sterilised jar, a Kilner jar with a clamped top is good, and leave on the window-sill for about 30 or 40 days. Shake from time to time. It will gradually become a deep brown colour.

After this strain the liquid through a muslin cloth. At this point you can dilute it and sweeten it by mixing in some water in which you have dissolved some sugar. A litre of water and 250 grammes of sugar is suggested. But this is a taste thing.

Put all these together in a container, a Kilner jar, or a demijohn (Bonbonne), which has been sterilised. Leave to fuse for about 30 or 40 days.

If using a demijohn then multiply the quantities to fill it. For 5 litres of wine, use 25 Walnuts and a kilo of sugar (and a litre of alcohol later - see below)

After the wait strain the liquid through a muslin cloth and add 200 ml of Eau de Vie (or other alcohol) and put into sterilised bottles. You can use it after 6 months but leaving longer is better. 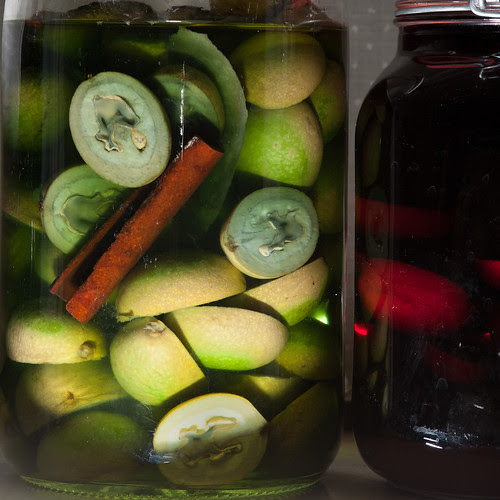 The first day. The liqueur is on the left and the wine on the right.
Posted by Steven House at 10:59 1 comment: 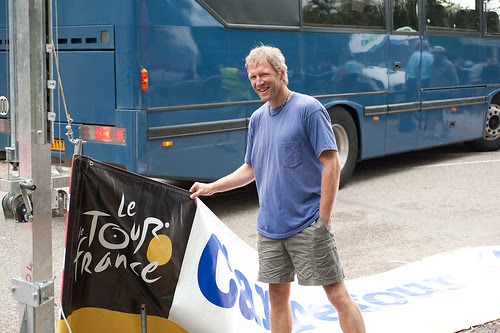 Do you say ‘Hup!’ every time you lift something?
Ever since last summer I’ve found myself saying ‘Hup’ every time I lift something. I caught it from a an erstwhile friend of mine whilst running a canoe touring holiday in the south of France. We reach down to lift a canoe and he says ‘Hup!’. He bends down to pick up the cooler and says ‘Hup!’.

Now I do the same. Is this merely a tic? Can tics really be contagious?

This started two years ago when we worked together and then visited the Tour de France in the Vosges afterwards. It was exacerbated by working together again last summer. It’s possible that we will work together again this summer and all my efforts to rid myself of this debilitating habit will be in vain. I’m considering contacting the boss and insisting that I can’t work with this fellow unless I can be assured that he has taken some remedial steps to eradicate this deplorable habit. But how could I be sure?

I’m not even convinced that he’s that aware that his ‘Hup!’ tic is contagious and is capable of contaminating all his relationships. I imagine that a growing circle of his friends are gradually spreading the syndrome to all and sundry. It’s perhaps just as well that the syndrome  exists only in the spoken form otherwise it would spread through his excessive use of social network medias. Imagine the consequences then.

Is it worth losing a friend over? I’m trying to curb the number of times I say ‘Hup’ but fear that when we meet up again, I shall revert to saying ‘Hup!’ at every appropriate opportunity. Appropriate?

Should I instead make the effort to try and cure my friend by attempting to curb his use of ‘Hup!’? I have a suspicion that he is also slightly embarrassed  by it and would welcome an effort to put it to bed.

Any suggestions for a cure are welcome.

The problem is that it often amuses us, when doing fairly mundane tasks, and helps synchronise our lifting. It also tends to amuse our spectators too though I’ve heard no evidence that the tic has spread to them.

I’ve tried to look at the source of the ‘Hup!’ problem and have come up with two possible explanations: a) ‘Hup’ is used in the Dutch language to mean ‘go’ and b) ‘Hup, 1, 2,3’ is used as the beat for a Military 4/4 cadence.

Paul is definitely of Dutch descent, and has been known to wear clogs, and has done no Military training. His disreputable unkempt appearance and beatnik hair are a testament to both of these facts.

In the interests of preventing the further spread of this lamentable condition I would urge you to stay away from the company of Paul Miller, particularly if you are to assist him in any labour intensive work that includes lifting. In particular avoid visiting Battenkill Canoe when he happens to be working there. Fortunately that’s not too often these days. He can be found (don’t!) somewhere in the nethermost regions of New York State, and can sometime be spotted in Holland or France. You’ve been warned.
Posted by Steven House at 11:21 No comments: