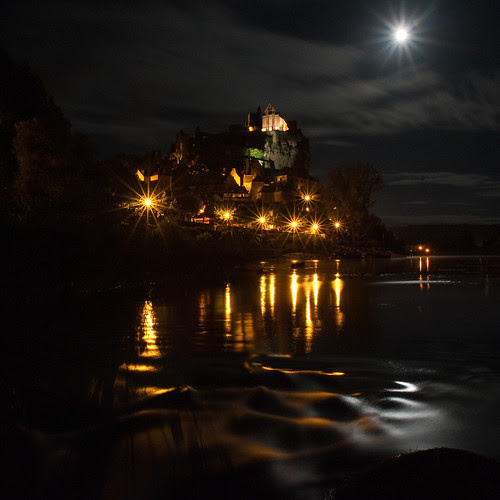 A Full Moon over Beynac

In the summer of 2009 I was guiding a canoe trip in the Dordogne region of France with my fellow guide Paul. We had two couples doing the trip but Greg and Lisa got hung up on doing a night paddle. It was plain to see that a full moon was coming up and I think this gave them the idea to suggest a canoe in the dark. It's not something that's on the schedule nor something that I've done before, though I have quite often paddled at daybreak to see the sun rise. 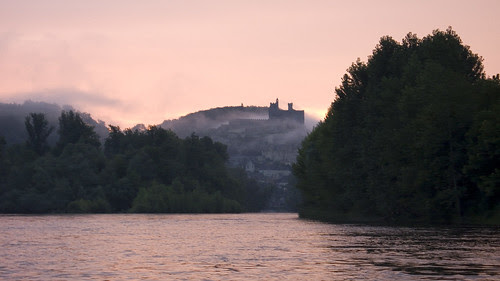 After stringing them along for a couple of days Paul and I considered the request and worked out when best to do it. We decided against a night paddle on the Cele as this is a narrow stream with many small obstructions which would be difficult to negotiate in poor light. That left the Dordogne river which we normally paddle for three days. The problem here was just dealing with the logistics of where we would start and finish the paddle and how we would get to and from these places to our accommodation. After some thought we decided on the section betwen Roque-Gageac and Beynac. This would be about an hours paddle on a section of river which flows fairly fast but which has no obstacles and which has easily recognised landmarks along the way.

On the day we normally paddle this section we go from Montfort to Beynac via Roque-Gageac and Castelnaud. When we arrived at Roque-Gageac in our three canoes (Mike and Todd, Greg and Lisa and me; Paul was driving) we left one canoe there and Greg and Lisa joined Paul in the minibus. The other two canoes continued downstream to Beyna to finish the day as normal. 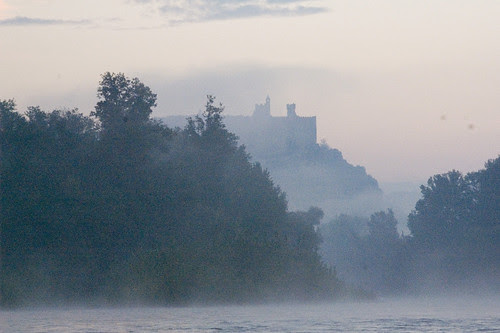 That evening, after dinner, we tied a canoe to the roof of the minibus and drove the short distance up to Roque-Gageac from Beynac. Even though it was dark we had to wait an hour or so for the moon to rise so we had a wander around the small lanes at the back of the village and then found ourselves walking a track to a view point above the river.

We left the minibus in the car park and launched the two canoes into the dark water as the full moon rose above the valley. Greg and Lisa were in one canoe and Paul and I were in the other. It was quite easy to see our way on the river and it was easy to navigate in the dark. The river is quite wide here. The town and cliffs at Roque-Gageac were lit up, as were the castles at Castelnaud and Beynac. All in all it was an easy and pleasant ride down to Beynac which we all enjoyed.

The only unfortunate note of about the trip was that I didn't take any photographs. It's difficult to take night shots from a moving canoe!

This year it was also a full moon whilst we were at Beynac so I was determined to try and get a night-time shot. However this year no-one else wanted to go out on a midnight paddle so I was forced to do it alone. It's probably not a good idea to go paddling on a river at night on your own and the problem was exacerbated by the fact that I would have to paddle upstream to get back to my starting point.

Just below Beynac the river splits into three channels and I new that there were several gravel bars where I could disembark and set up my tripod to take some shots looking back at Beynac. During the day I had paddled from Montfort to Beynac (as usual) with our guests. On this trip we only had three; Alan and Kristin in one canoe and Ashley and me in the other. When we arrived in Beynac I suggested to Ashley that we could explore the channels just below Beynac before finishing for the day. I knew we would have to paddle around the islands and back upstream but I thought we had a good chance of spotting some wildlife in the backwaters.

The channel on river left is the main stream and flows quite fast. The channel on the right is narrower and slower. I've often paddled this section in the early morning and very often seen Coypu (Myocastor coypus) here - also known as Nutria, Ragondin or Beaver-Rat. Once I also disturbed a pair of Eagle Owls (Bubo bubo). You can guarantee to see Mallard Ducks ((Anas platyrhynchos), Grey Herons  (Ardea cinerea) and Kingfishers (Alcedo atthis). The middle channel is not always navigable as it can get very shallow when the river is low and is generally where all the flotsam and jetsam get washed up.

On this late afternoon Ashley and I took the channel on river right and drifted down the narrow channel, ducking under trees and gliding past a limestone cliff wall. Inside we had to negotiate around several gravel bars and we nosed our way into a couple of dead-ends before re-joining the main stream. We didn't see any Coypu, though we did come across a pair of Mute Swans (Cygnus olor).

To get back to Beynac we sneaked up the side of the main channel and kept out of the fast water. About half-way up we came to a connecting channel which took us into the centre channel. I took this wasy as it looked calmer and easier to paddle and could also provide us with a glimpse of the wild-life. In fact this channel was extremely shallow and weedy although we discover that is was a refuge for Grey Herons and we saw about a dozen of them. It looks like this could be a hidden heronry. As we continued upstream the way became weed clogged and too shallow to continue paddling. Instead I hopped into African Queen mode. That's me as Humphrey Bogart and Ashley as Katherine Hepburn. Fortunately I had tied a rope to the front of the canoe so I was able to jump out and pull the canoe through the watery weeds for a hundred yards or so until we reached open water again. The reason Ashley didn't walk is because she had a bad leg. But I always enjoy this kind of splashing about anyway.

Once I was back in the canoe we were able to paddle the final section of the centre channel until we came to where the river split and Beynac was a mere few yards away. the river runs quite fast here but we were able to ferry across the fast water and then edge up river bank until we could beach the canoe. I would find out later that I really needed Ashley to help me on this upstream paddle.

So after dinner that evening I decided I wold re-trace the paddle I had done with Ashley so that I could get the night time shot I was thinking of. No-one else wanted to paddle but I was confident I could manage alone and in the dark. Carolyn (my co-guide) helped me carry the canoe down to the water and I jumped aboard with my camera bag and my tripod.

I slipped across the fast water and took the centre channel which I knew got shallow very quickly. I beached here and set up my tripod to get several shots of Beynac all lit up with the castle high above and the moon rising above the castle. It took me several exposure to get everything right. I was slightly disappointed that I had come earlier as the moon was already quite high. After deciding I was happy with the shots from here I though I'd like an alternative view which omitted all the street-lights along the river bank and just gave me the moon and the castle. To this end I paddled upstream out of the centre channel and turned the canoe back downstream to take the right channel.

After 50 or so yards I ran the canoe aground and hopped out to get the shots I wanted. It was perfect, from this point of view I could see no street lights at all. 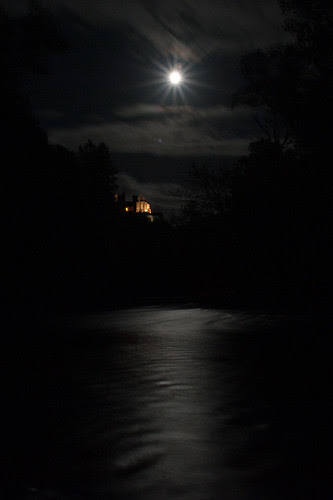 After several minutes messing about with several different exposures I got back in the canoe and started to re-trace  my route back upstream. It proved difficult as the river was flowing faster than I thought and I could scarcely make any headway.  after tem minutes of creeping upstream I decided that this was too much effort and I would be better off hauling the canoe instead.

I took the canoe to the edge of the island and jumped out and began to pull the canoe, using a rope, through the shallows. This went well for a while until I had to drag the canoe around a sunken log. At this point I had to wade deeper and was surprised when I sunk down to my waist! Once around that obstacle I continued pulling the canoe until I got to the head of the island where the channels split.

It was obvious now that I wouldn't be strong enough (with no Ashley to help) to paddle directly upstream so instead I ferried across to the right bank and again jumped out to pull the canoe up to where I could leave it for the night. Eventually I was able to drag the canoe out and tip it over before walking up the steps and entering the hotel dripping wet and laughing.

In future I will take a bit more care about paddling at night and will probably not do it alone again!
Posted by Steven House at 13:45 No comments: 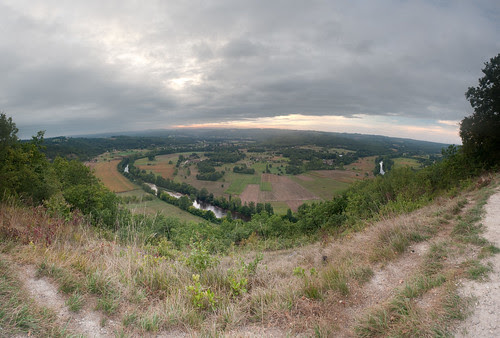 Another canoeing trip to France is over
I've just returned from another canoeing trip in the Lot and Dordogne area of France. It was a lot of fun especially when canoeing at night under a full moon. (photographs from this excursion will come later). This trip was spent in the company of Carolyn (my co-guide) and our guests Ashley and,  Kristin and Alan. 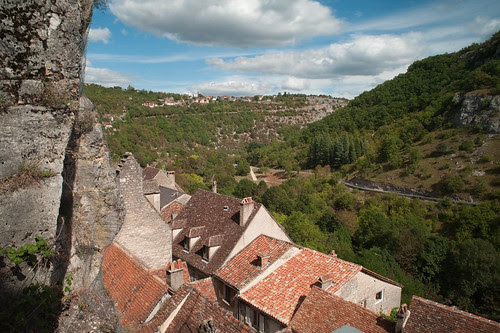 Posted by Steven House at 14:38 No comments: