Commenting in a Group
Yesterday I described how tedious the current Flickr User-Interface is for the simple job of adding a photograph to a group and then commenting on a few photographs from that group.

This is practically the raison d'etre of Flickr. Why is it so painstakingly tedious?

This is how it could be.

So first things first. Here is the Flickr page with my image. Remember I want to add this to a group and then comment on some other photographs in that group. 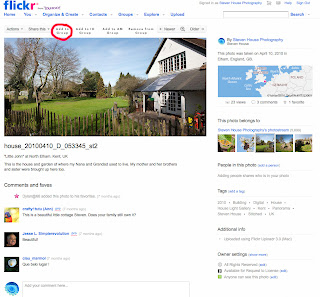 This click brings up a box which lists all the relevant groups I can join and no others. 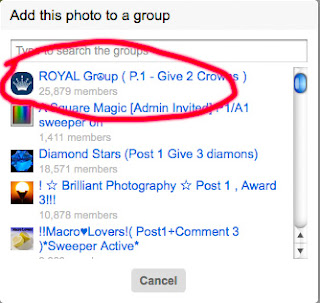 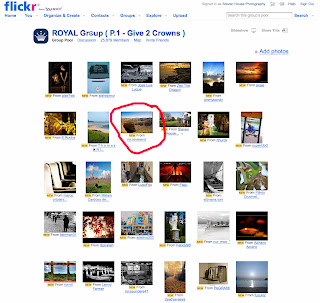 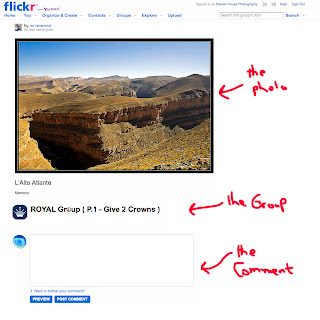 This page shows me three things I'm interested in and no others. The photograph I want to comment on. If I click on it I get the black screen big version. If I click on the Title of the photograph I go to the usual page which gives all the photograph's details and shows all it's comments etc.
I have a reminder of which group I'm commenting in. If I click this I go to the usual page which gives all the group details.
And I have the comment box. If I start typing it starts appearing in the comment box. When I'm ready I hit the 'Post' button and the comment is added to the photograph. (Click 4). As if by magic the comment is appended with the text 'Seen in Group X' and is perhaps also appended with the icon of the group. If it was up to me I would disallow any html in this comment box.
The interface now returns to the group page. 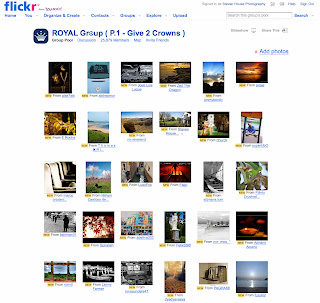 I can now select another photograph to comment on.
The advantages of this interface are:
a) it's quick and simple
b) it encourages you to look at the photograph you are commenting on
c) it encourages proper comments not merely 'Seen in Group x'
d) it doesn't waste bandwidth by downloading tons of unnecessary stuff
e) it cuts out large graphics in comments
f) it cuts out animated gifs in comments
To facilitate this type of interface I'd add a couple of boxes to the group page for the group admins to manage. Like this ...
a) a text for appending to comments made for the group
b) an icon for appending to comments made for the group
c) a radio button indicating whether the group was 'Regular', 'Invite Only', or 'Admin Moderated'.
Nothing more needs to be added really. Wouldn't it be a pleasure to add comments to photographs if it was this easy?
Posted by Steven House at 13:05 No comments:

Commenting in a Group
I’m going to describe in mind numbingly boring detail how the current Flickr User Interface works when you want to add your photograph to a group and then comment on some of the photographs in that group.

The aim is to indicate how tedious the whole process is and how you have to jump through hoops to achieve something as simple as this.

I’m describing, by the way, one of the most fundamental aspects of Flickr. You upload a photograph, you want to add it to a group and being of a friendly disposition you want to add some comments to a number of photographs in this group. Some groups, in the interests of receiving feedback, like to insist on this. You will often see “Post 1 Comment 3” lines attached to Group descriptions. Normally I like groups where they ask that you comment on a maximum of 3 other photographs when you post in that group.

I find commenting on more than 3 too onerous a task.

The other consideration is that many, if not most groups, like you to suffix your comment with a tag which indicates where you saw the photograph in question. This is normally in the form “Seen in the X group”. This is often supplemented by a graphic. Often these are horribly large, or worse, incorporate some nasty flickering animated gif nonsense. I’ll address the issues of this tediousness later.

So first things first. Here is the Flickr page with my image. Remember I want to add this to a group and then comment on some other photographs in the that group. 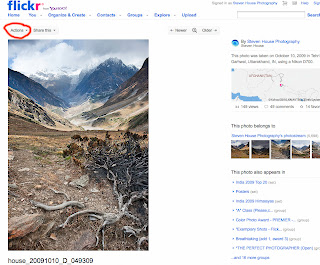 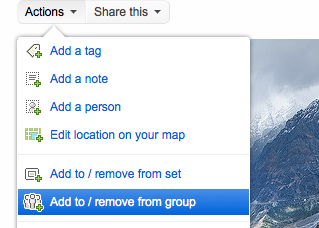 This brings a pop-up of the list of groups that you belong too.

You will have to scroll through this list to find the group you need. 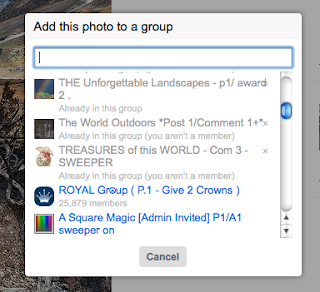 Some points can be made here:

a)    this list includes groups that the photograph already belongs too. These are at the head of the list so you will have to scroll past all of these first to find a suitable group to add to.

a)    this list includes all those groups to which you’ve already added the maximum of photographs for some given period of time. The most common is “1 Photo per Day”. You wont know this until you try it. Nicely tedious.

i)    this list includes all those groups which are “Invite Only” e.g. you have to wait until you are formally invited before you are allowed to put your photograph in the group. There is no indication that a particular group is of this type unless the group admins have thoughtfully included this fact in the name of the group. You’ll have to tediously scroll past these groups whilst searching for a group to add to or you will incur the wrath of the group administrator when you accidentally put your photograph in an invite only group without an invite.

i)    this list includes all those groups for which photographs have to be moderated by the admins of the group before they are allowed in the group. There is no indication that a group is of this type. You will never know if your photograph is accepted into the group unless you go back later and have a look. This process can take days, weeks, months even years.

The name of this group will now appear in the list to the right of your photograph on the page. In this example it appears just above the line “ and n more groups”. It could just as easily appear below the line “This photo also appears in”. You never know which one. It’s just to keep you one your toes. 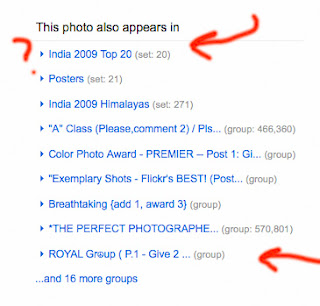 OK, after all this palaver, the photograph is now in the group you selected. Lets go about adding some comments to other photographs in this group.

We need to see some examples of photographs from this group so first select the group name from this list (Click4). This click doesn’t take you there but does show you photographs before and after yours in the group. I hope that’s useful to you because it isn’t to me. 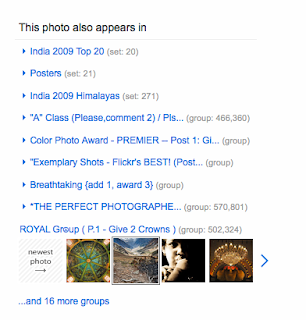 Finally this brings up the group page, and shows the grid of most recent photographs in the group. But this isn’t what I need either. What I’m looking for is the “Seen in Group X” code that I can append to my own comment. I like to be friendly. 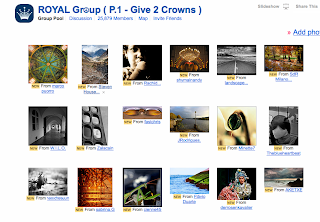 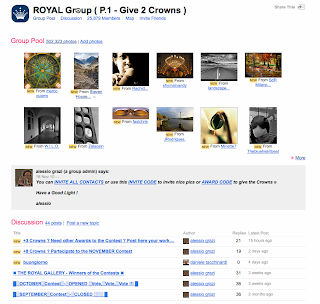 This brings up the groups home page. Somewhere on this page is the code I’m looking for. So scroll down and find it and when you find it cut and paste it into your clipboard. 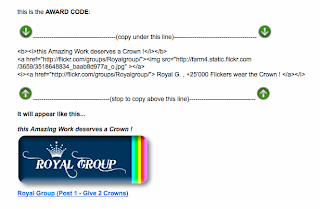 Then hit the “back” key to get to the previous page which shows the photographs. (Click 7).

We’ve seen this page before. This time it’s the page we want.  Choose a photograph to comment by selecting it’s icon (Click 8). 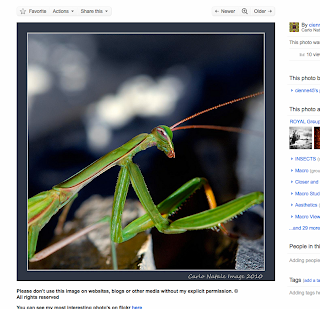 Loading a lot of comments takes a lot of time. because many comments are loading with large graphics this also adds to the amount of time it takes to find the “Comment Box”. 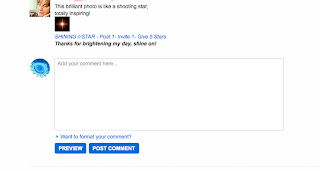 A keyboard short-cut will take you to the bottom of the page but it might get you there before the comments have fully loaded. You may have to press it several times. You see the “Comment Box” and you have to click inside it before you can type your comment. Click 9) Just before you do, some more comments come in and the box scrolls down and you inadvertently click something else. This may or may not take you to another page and you may have to spend some time getting back to where you were. I hope you are enjoying this.

Sometime it’s even worse as the comments come flying in separated from the graphics associated with them so the “Comment Box” is actually bouncing up and down the screen and you are desperately trying to click inside it so you can make your comment. It’s exciting really. Like a computer game ... from the ’80’s.

Eventually your screen settles down and you’ve clicked inside the box. You can’t see the photograph at the moment. It’s at the top of the page. Can you be bothered to go back and have another look? Did you see it in the first place? Often I’ve pressed the keyboard short-cut to get to the bottom of the page before the photograph ha even appeared.

Usually I just paste in the “Seen in Group X) code that I cut earlier. Thinking of something fresh to say now does not come easily. I’m getting a bit frazzled. Click the “Post Comment” button and the comment is posted. (Click 10). Finally.

Smartly Flickr reloads the photograph page you’ve already seen and reloads all the comments, you’ve previously ignored, and adds your comment at the bottom, which you already know about. So click the back page button (Click 11) to get back to the group page so you can select another photograph to comment on. If you can bear it.

So after a dozen clicks, some serious scrolling, some cut and pasting, some shooting to the bottom of the page shenanigans and some hallucinogenic page bouncing you have finally managed to add one comment.

Tomorrow a look at how this interface could be improved. Really?
Posted by Steven House at 12:36 1 comment: